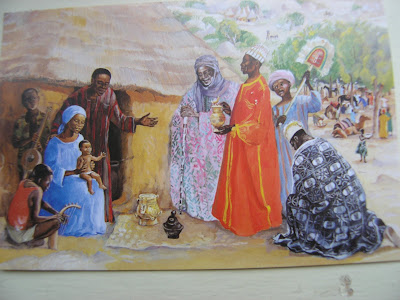 My Christmas card this year came from a print on my Mum’s wall.

It is the Adoration set not in a stable at night in Italy but outside a mud hut in heat of the day in Sub Saharan Africa. With camels ,horses and their owners resting from the heat of the day in the shade of trees in the distance, in the foreground we have three richly attired Africans bearing gifts for a black baby Jesus, they are attended by a servant cooling them from that African heat. The baby Jesus is presented to the prestigious visitors by the Virgin and Joseph, both African, outside their mud hut with young boys playing traditional instruments to celebrate this illustrious meeting.

The image was both a surprise and delight to me.

It was a surprise, simply because I had subconciously succumbed to the cliché Renaissance image of the Adoration which itself was a fabrication in which the artist made it a contemporary scene, setting the Adoration in a place which was familiar to anyone living in Renaissance Italy, populating the image with figures attired in dress of the day - a totally fabricated but comtempory image.

It was a delight, as here is an artist trying to re-invent the Adoration scene in order to connect with a particular group of people - black , sub Saharan Africans. Just as we have many translations of the Bible aimed at different audiences so, why not have different images aimed at different groups? I am sure St Francis of Assis (1181/1182 – 1226) the originator of the images around the Nativity would have approved as this is simply Biblical education - evangelising the Jesus story.

St Francis believed in a world of vivid images designed to communicate the stories of the Christian faith to the congregation many of whose members could not read or write.....He felt that visual images could bring men closer to God and much of his preaching was fervently visual. (2)

The site I purchased the cards from has a common vision with St Francis, almost 900 years later:

It is urgent and necessary for us to proclaim and to express the message, the life and the whole person of Jesus-Christ in an African artistic language, in our language which is the expression of our daylife, of our culture (3).

This image never ceases to surprise and delight me after seeing so many with St Fancis’s Adoration images Jesusmafa's remains a revelation and source of great pleasure – Three Sub-Saharan African Magus - An African Adoration!