More Blacks In the Sistine Chapel

Having found one Black in Sistine Chapel I was delighted to find yet another, I found this Black, suitably in black and white, while leafing thru the first edition of Fredrick Hartt’s brilliant Italian Renaissance Art (1969) Figure 353 page 292 [1].

One wonders who was the turbaned African [see above] whose curly beard and luminous eyes Botticelli has represented with such sensitivity.

We can certainly ‘wonder’ as the picture and Hartt’s comments raise so many questions:

Who is the Black , why is he there and what is he doing ?

I will try to answer those questions, if possible.

First let’s consider the picture’s position in the Sistine Chapel’s Florentine fresco scheme along with how its composition fits the Chapel's scheme.

The Black is part of the Life of Moses scheme of frescoes, specifically the one by Botticelli – Scenes from the Life of Moses. This is one of my favorite of all the Florentine frescoes in Sistine chapel, contrasting on one side of the chapel the life of Moses with that of Jesus on the other side. This is Biblical scholars , with the help of artists, making manifest the connections between the Old (Moses) and the New (Jesus) Testament. Reconciling the Old Testament with the New - Judgement with Love - this revelation and exposition was the work of Biblical scholars throughout the ages

Botticelli uses an established drawing technique to show the passage of time as the story evolves,  I first saw him use this technique at the 2001 Royal Academy exhibition of his drawings for Dante’s poem – The Divine Comedy.

It was a technique I recognized from many comic books and graphics I’ve read, where a character or characters are repeatedly drawn in different poses and positions apparently moving  across a fixed unchanging background, in doing so creating the illusion of the passage of time. Botticelli shows Virgil, in red, and Dante descending into Hell against the scene showing  the punishment of the Panderers and Seducers and the Flatterers.

That same technique is found in a 2009 graphic novel Logicomix where its two authors discuss on a walk in park , the madness produced in the pursuit of putting logic on a firm foundation.

Botticelli has up to seven scenes from the life of Moses in his fresco: 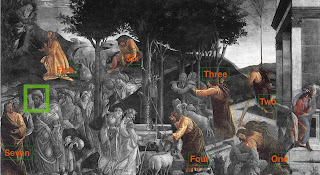 One Moses kills an Egyptian who had attacked a Hebrew Exodus 2:11-12.

Two When Pharaoh heard of the murder Moses fled into the land of Midian Exodus 2:15.

Three There he drove away a group of shepherds who harassed the daughters of the local priest, Jethro.

Four Moses helped them to water their flockExodus 2:17.

Five God tells Moses the ground he stands on is sacred so he has to take off his shoes Exodus 3:5.

Six God tells Moses to lead his people from Egypt to the promised land.

Seven In the bottom left Moses and his family return to Egypt to perform that task Exodus 14:20.

( thanks to Art and the Bible)

On the wall opposite to this fresco Botticelli painted his Scenes from the Life of Jesus , showing the temptation of Jesus using the same comic book technique to show the three different temptations the Devil offered Jesus, during his forty day fast .

One Jesus had fasted forty days and forty nights, afterward He was hungry, when Satan came to Him, he said, “If You are the Son of God, command that these stones become bread.” (Matthew 4.2)

Two Then Satan took Jesus up into the holy city, set Him on the pinnacle of the temple and said to Jesus, “If You are the Son of God, throw Yourself down. (Matthew 4.5)

Three Satan took Jesus up on an exceedingly high mountain, and showed Him all the kingdoms of the world and their glory  “All these things I will give You if You will fall down and worship me.” (Matthew 4.8)

Hartt’s Black is found in the final scene of Moses’s Temptation. Much to my surprise he is not alone, there are in fact two Blacks. Careful examination of the painting's surface indicates that  the two were painted together during the course of one day. Strange that Hartt only mentions one , even though the second black has the same dark skin as the first as well wearing a turban, perhaps it was the second Black’s lack of  beard ?

Expanding our questions to include the second black we can now ask who are they , why are they there, what are they doing ?

What we do know is that this is Moses leading his people out of Egypt. The scene continues in the next fresco by Roselli – Crossing the Red Sea. Moses is recognizable from the others in Roselli and Botticellis’ crowds, as both artist picture Moses with   flowing brown hair and beard  dressed in a luminescent orange  under garment draped by a green wrap.

There are no Blacks in Rosselli’s  crowd. Moses can be distinguished by his hair and beard with his orange and green clothing in several other of the crowd scenes in Chapel's frescoes but there are only Blacks in Botticelli’s multitude being led out of Egypt.

So who are they ?

As discussed elsewhere in this blog, Blacks where certainly known in Renaissance Florence and Rome, in a variety of roles including slaves, bodyguards, traders and  ambassadors. But what were they doing in Egypt with the Jews? Botticelli’s Blacks do not look or act like slaves as they carry nothing, leaving this to the women and others and they are at the front of march almost shoulder to shoulder with Moses. They look like no one else in the crowd or anyone else in all the  Chapel’s frescoes.

In the absence of any firm evidence to answer the question we are left to speculate. They are beautifully painted indicating that they were drawn from life – people that Botticelli probably knew.

Accompanying the Jews into exile was another group (Exodus 12:38) variously described as a mixed multitude, a great rabble, many other people , a rabble of non-Israelites – perhaps these Blacks were simply part of that group taking advantage of the Jewish exodus to flee Egyptian tyranny.

Regrettably, we may never know and the questions as to who they are and why Botticelli depicted them in his fresco will go unanswered.