The Devon Panels and Adoration

I’ve now had a week or so to consider my photographs. Technically I’m very disappointed in the quality of my pictures when compared to the V&A’s photograph. My lighting is inconsistent, while my compositions leave much to be desired. If I have any saving grace it was the lighting conditions inside the churches were very challenging : flash was both inappropriate and when used produced poor results. I was far too keen to ‘see’ the Adorations - more attention should have been given to preparing the camera….next time I’ll be ready.

After much cropping I’ve reduced my 800 plus Roodscreen Adoration pictures to four – one each from Plymtree, Buckland and Ugborough and for comparison a panel from Brampton .

So, you can see from the video I would argue that the piece was almost certainly once part of a Devon Roodscreen, well from just looking at it. Specifically, I would argue along the following lines to show it was in fact a Devon piece....

It’s oak – all the Devon screens were made of oak and there all 36 to 39inches wide and about 36 inches high ( a rectangle - a metre and a bit wide by just under a metre high!)

Taking the blank Brampton as the base the essential features are four ogee arches each with tri foil tracery on a quatrefoil predella with a leaf at its centre – each of the arches has these features as do all other three screens.

The Brampton screen has had its colour removed, the others have varying degrees of polychromy. Looking carefully at the predella quatrefoil evidence of red and green alternating from one predella to the next can be detected particularly in the Buckland Adoration. However a word of caution should be noted as they have all be retouched restored reworked at some time so, sadly, one can be too sure what the original looked like. The piece was repainted in the seventeenth century according to its supporting documentation.

The carvings at least cam from the same late fifteenth early sixteenth century workshop or someone or group can be traced to a common source or tradition from Devon.

The common workshop style in the carvings cannot be detected in the paintings although they share common composition – V&C – Old King, Middle Aged King, Third King – their execution is sadly uniformly very poor and they share no common calligraphy. The paintings all appear to have been done by different – not very good – artists. All the my readings so far are uniformly scathing about Devon screen paintings ‘Deplorable’ - Pevsner ; ‘Crude’ ; V&A Gothic Exhibition and I must admit they are poor including the piece.

That’s all I want to say on the V&A piece my next posts will be about the Magi and that third King,
Posted by Paulo Veronese at 01:42 2 comments:

The trip to Devon was to see at first hand the three magi Tancred Borenius (1885–1948) the Finnish art historian ,mentions in his 1928 article for Apollo magazine which introduces the world to the piece. He mentions three churches with The Adoration and I visited all three (look on the right or see map):


All share - as I'll show you - the compsition of the piece and they all delighted in different ways.

What I was not prepared for was the colour as up till I saw them in the flesh I’d had old , very old black and white pictures from Stabb. I also had the most ludicrous pencil drawing of the Buckland-in-the-Moor Magi (below copyright Apollo Magazine March 1928). 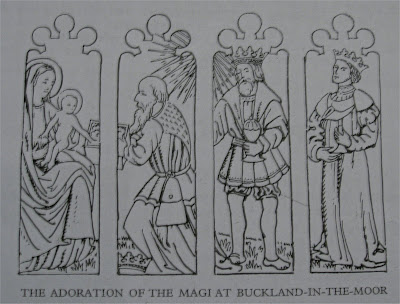 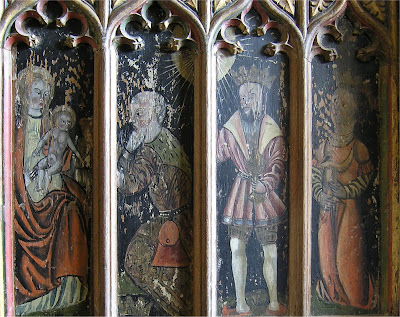 To see them in colour, in situ is an outstanding experience. Fully appreciate all have be touched up over the years – including the piece ( the V&A note in its files says it was repainted in the 17th century)- nevertheless there is just something wonderful being in front of a object over 500 years old still in its original location (well nearly, as many were moved about ...more of this later).
Posted by Paulo Veronese at 13:11 No comments:

Have spent so much time in the west country I’ve ignored the east – Suffolk and Norfolk – where there are the most glorious roodscreens but it’s off topic as far as my essay goes. A mention in passing is all that they will have. Never the less there is the most wonderful site I’ve ever seen covering roodscreens of Suffolk and Norfolk.

It’s received many accolades not surprising when you see the depth and breath of its coverage of its eponymous subject.

There’s supposed to be over 200 churches with roodscreens in the Suffolk/Norfolk area while the Devon according to Pevsner there are 100. (Those figures are form memory so need to be accurately referenced).

So the east has twice as many churches as the west and a great site to promote its churches the west country seems to come worst off…….waiting for someone to create the definitive work on the net – the nearest the transcription of a 1908 book on roodscreens.

So there’s a opportunity for someone to create THE definitive site for Devon.

Posted by Paulo Veronese at 05:15 No comments:

But I not sure it was real roodscreen first it didn't look like any roodscreen I'd seen as the proportions and tracery just looked 'wrong'...and there were no panels with Saints. The thing that clinched it , for me, was where would you put the rood aka the Cross with Mary and John either side of the cross? For example there's a complete one a St Mary's In Charlton-on-Otmoor. So, you can see the ebay Roodscreen (for me) does not look substantial enough to be a 'proper' roodscreen.
Posted by Paulo Veronese at 09:39 No comments:

The magnificent alabaster monument of John 4th Lord Harington (d 1417) and his wife Elizabeth. The monument is one of the finest of its period (so the plaques says!).

On the column opposite you can see were the beams of the Screen and Loft met the column.

A useful little guide to the church reports that the Roodscreen was taken down in 1789 for which one James Taylor was paid one shilling for his troubles...hmmm didn’t realise he was that old or worked for so little :-) .

Seems every small village church of which there are over 100 has some relevant piece often pieces. I’d argue anyone in Devon is spoilt for choice it’s bristling with the stuff!
Posted by Paulo Veronese at 00:08 1 comment:

It's been quite these past few days as I've been busy completing TMA 3 (OU speak for the third Tutor Marked Assignment in the course) .

This is glorified essay plan, in which I have to put flesh to the essay title. What I am going to write about and what are my sources, both primary and secondary.

An investigation into the making, locating and viewing of The Black Image in an early sixteenth century painted panel - The adoration and of the Magi Panel - Victoria and Albert Museum catalogue number W.54-1928.

This essay is an investigation into the Black presence on the early 16th century painted panel from the V&A collection W54.1928. It first sets out to establish that the panel was probably part of Devon Rood screen by comparison with the constructions of and the images on roodscreens still in their original Churches in Devon. From this analysis how the panel was made is discussed. Next the image of the Black Magi within The Adoration will be considered, how the image developed and moved across medieval Europe eventually reaching rural South –West England. Finally having established that the panel made a part of roodscreen and with some knowledge of where the image of the Black Magi came from the final part of the investigation will consider what the image of a Black Magi on an the Roodscreen may have meant to those who possibly have commissioned the panel and to those who might have viewed it.

This allows me to follow the structure of the course while building up to the final piece on viewing the image – what viewers might have a thought and why.

Which of the three themes of the course do you plan to focus on, and how does it/do they relate to your essay topic?

What was the purpose to the panel ?
An analysis of what the panel and its image was as part of an English roodscreen by comparing its construction and images with contemporary panels still in their original positions.
What was the role of the Black Magi ?
The image as part of a Devon roodscreen its didactic , social and possible patronial significance.

As it’s a TMA it’s marked in as much the tutor comments on it - in short is there enough (or too much) for a decent essay.

It had to be in by midnight 4th July. It’s in. I now await feedback.
Posted by Paulo Veronese at 00:28 No comments:

I'm planning a trip to Devon to see some real RoodScreens in their orginal locations. To plan the trip I've started using Google maps hence the map on the right. here Ive marked the most interesting Churches.....watch this map.
Posted by Paulo Veronese at 09:32 2 comments:

Found a post on Flikr of a panel in Roodscreen in Holne. seems as though Devon's bristling with medieval roodscreens.

Posted by Paulo Veronese at 12:01 No comments: