I just completed the part of my essay where I compare the piece to the Ugborough Adoration with the a view to showing how similar they are, ending with the claim that the Ugborough’s fourth panel should be a black magus looking a bit like the one in the piece. I was now about to go to talk about the quality of the painting or the lack of quality as Devon roodscereen paintings are universally condemned….

The V&A’s Gothic Art in England states Devon rood-screen panels ..can at best be called crude or vigorous

I would have agreed but there is small glimmer of some of the most delicate brash work creating a fine Gothic foliage in the cushion the V&C sit on in the Ugborough Adoration.

It’s shown in detail below and comapred with the throne that piece’s V&C sit on. 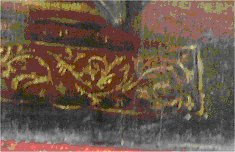 The piece’s work shown below is crude with broad brush strokes lacking the subtly , flow and gentleness of the Ugborough’s floral work.

It could be argued that the piece was once as detailed and floral but when it was repainted in the 17th century the artist brushed over the detail.

But what troubles me if the Ugborough artist had seen the piece or in deed was one and same artist why do such wonderful detail work and leave the rest of the piece looking so ‘deplorable’, ‘crude’ and ‘clumsy’ ?

Posted by Paulo Veronese at 14:34 No comments:

Of the three Adorations I photographed in Devon Ugborough was in the worse condition – very damaged and very dirty . But this hid the most wonderful discovery the Ugborough artist had seen the Victoria & Albert (V&A) piece copying his style or the same artist could have done both. I say this after careful comparison of each of the five subjects – Virgin & Child (V&C) , star and three ‘kings’. 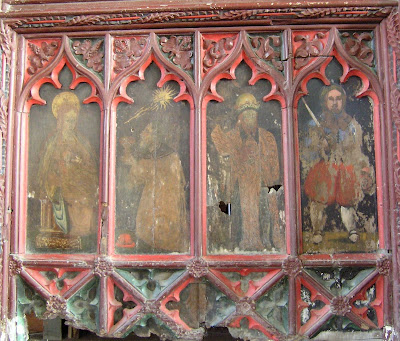 The one that first caught my eye was the odd pose of the second king in the V&A piece his legs stick out of his orange gown , through the Ugborough grime you can just make out the same legs and gown – same pose. Further looking and you can see the postures and gestures are identical – he looks to the third king and points to towards the V&C. 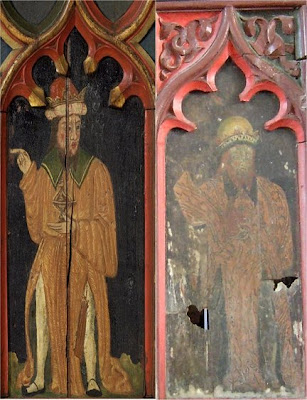 The first kings adopt similar poses along with red crowns respectfully place on the floor as they pay homage to the Christ the King of Kings. The Star is in the same place in both Adorations and share essentially the same physical presentations – a long comet like tail pointing to the baby Jesus. 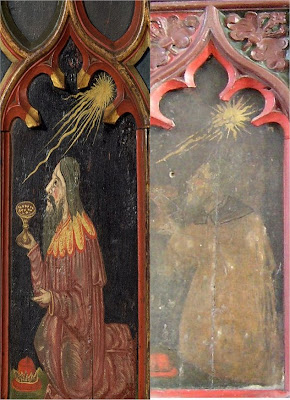 The V&Cs are seated on similar thrones however while the V&A piece points to the Star to indicate Christ’s divine status , the Ugborough Virgin seems to point to the baby Jesus as if saying ‘Here is Christ the King’. The Virgins’ clothes are also similar. 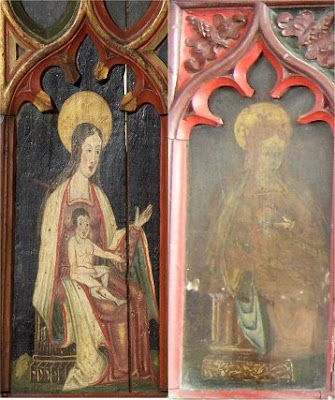 The third kings’ comparison is problematic – in the V&A it’s the Black Magi , in the Ugborough it’s a Saracen sword in one head a cut off head in the other (according to a label on the panel).. I would believe that this panel is a replacement - it was originally a Black Magi like the V&A! 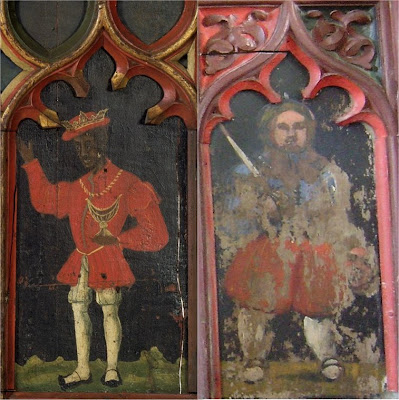 Having spent the last month or so researching roodscreens I now plan to turn my attention to the Adoration and the presence of the Black Magi as the piece is an abstraction of The Adoration story – V&C, The Star of Bethlehem and the three Kings - in four panels.

One word that sticks out above all others in my readings on the Adoration aka The Epiphany aka The Story of the Three Kings aka The Nativity whatever you prefer to call it, that word is - tradition.

‘Tradition’ ,as I see it, is a euphemism for:

[W]e know the story isn’t really true or ever actually hppened, as we have no proof and if you stress us we believe it’s a total fabrication but can’t say so too loudly as this may offend too many people.

The Adoration has several traditions developed from the story in Mathew's Gospel (Mat 2:1 ff)

For the detail see the Encyclopaedia Britannica on the Magi

Here are the ‘traditions’ I’ve noted…..:

The star was only visible by those who knew where to look and what to look for as Herod asked the ‘wise men’ confidentially where the star was (Mat 2.4) despite the fact he knew the star was in the ‘east’ (Mat 2.2). Herod would have had his own astronomers so knowing the ‘star’ was in ‘east’ should have been enough as it would have been a new celestial event so, it wasn't very bright.

There were three gifts gold, and frankincense, and myrrh (Mat 2.11) which through ‘tradition’ meant there were three wise men, the Eastern Orthodox church has 12 wise men - another 'tradition'.

Magi - the plural of Magus - astrologers from the Persian court, for the detail on Magus see the Encyclopaedia Britannica

They first became ‘kings’ in about 200 AD thanks to one of the Elders of the African Christian Church ,a Carthaginian called Tertullian who read Pslam 72 9:10 as foretelling of the Adoration (Trexler, pg12). It wasn’t until 6th century it became a ‘tradition’.(The Oxford Companion of Christian Art).

It was difficult to reconcile three kings from one country so they became three generations as well as being given names : Gaspar (aka Caspar aka Jasper) - the old white bearded king ; Balthasar - the middle black bearded aged king ; the third Melchoir - the beardless, fickle, foppish youthful king. Al being in ornate attire.

It’s that last symbol I’ll consider in my next post.
Posted by Paulo Veronese at 00:14 No comments: