Taken Back to My Comparative Roots 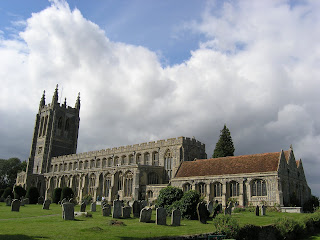 Holy Trinity Church, Long, Melford, Suffolk
The outcome of my visit to Suffolk’s fifteenth century Holy Trinity Church at Long Melford in search of more Renaissance Blacks was a very pleasant surprise. Although I did not identify any Renaissance Blacks, I did find one Black , more of that later. I was taken right back to one of the fundamental reasons as to why I enjoyed studying Renaissance works of Art - it is Art with a purpose. Comparing English and Italian Art of the time and its meaning makes my Renaissance studies even more enthralling. Walking around Holy Trinity considering the purpose of the building and its Art and artifacts took me back to my comparative Renaissance roots. 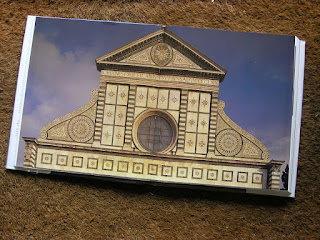 Detail of Upper Part of façade
Santa Marie Novella , Florence
The lettering frieze high upon Holy Trinity’s flint and stone battlement walls compares with one of my most enduring Renaissance images - the polychrome marble and marble inlay facade of Santa Marie Novellla (built 1448-70) in Florence which is dominated by the name of its patron - Giovanni Rucellai  (1403–1481) incised into the marble in large Roman letters :


IOHANES*ORICELLARIVS*PAV* F*AN*SAL*MCCCCLXX
Notably the patron's name is incisied  in full with the remaining text in abbreviation, in its expanded form reads:

Giovanni Rucellai son of Paolo in the blessed year 1470.

Pray for ye sowlis of William Clopton, Margy and Margy his wifis , and for ye sowle of Alice Clopton and for John Clopto’, and for alle thoo sowlis ye seyd John is bo’nde to pray for....

Clopton and Rucellai are united in their appeal to the community to recognise and remember their efforts: Rucelliai seems to want them to know who he is - “the big man” while Clopton seems more much modest and community based in his appeal.

Givovanni Rucellai was one of the three richest men in Renaissance Florence , his wealth was founded on cloth and banking, presents himself through the abbreviated Latin text as an humanist elite, an educated man , a benefactor to city who like all good Florentines should : was glorifying God, venerating his heritage and honouring his city.

John Clopton was also a wealthy man whose fortune lay in cloth but seems to aspire to none of Rucellai’s intellectual or civic ambitions. One might go as far to say that difference is revealed in their respective, chosen language - vernacular English and elitist Latin. Clopton could be seen as the country bumpkin contrasting with Rucellai the sophisticated urbanite.

That contrast country versus town, common versus elite is further reflected, in the architecture of the two churches. Santa Marie Novella , Florence
Alberti models his façade on his idea of harmonic unity rooted in Classical ideas found in the Roman Triumphal arches like Constantine Arch. Where proportion and symmetry are the dominant design guidelines: man being the measure of all with each of the works element in balance.

Alberti’s Classical façade masks Santa Marie’s thirteenth century Gothic structure. Holy Trinity has no presumptuous façade. It is what it is. Holy Trinity Church makes no pretence to hide its identity or history - a very pleasing honesty, lacking in pretension - a church built to the glory of God, with the help of John Clopton and others from the its environs 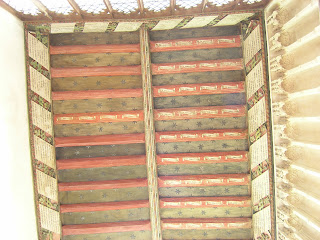 Decorated Ceiling of Clopton Chantry Chapel
Holy Trinity is built in the Decorated Gothic style: intricate tracery windows with much ornamentation, maximum surface decoration with many statue niches - decoration and colour everywhere even on the ceilings! There is symmetry but it is not a slave to the design: its Family chapels, its Porch and Lady Chapel have been incorporated into the design organically rather than to strict symmetrical plan, creating pleasing and often unexpected, surprising views.

The contrast between Classical and Gothic design still resonates to day for example America’s Classically inspired Capitol Hill and Britain’s Gothic Houses of Parliament - two very different designs perhaps reflecting the different governments - Presidential versus Parliamentary.
…...and I did find a Black he was on the Parish Baptism and Weddings notice board a wedding photograph of him and his bride dated 7th Aug 2010 !
Posted by Michael at 23:26 1 comment: