No plan survives contact with the enemy.  Sun Tzu ‘Art of War’
Back in the Eighties (1980s)  Art of War was essential reading whenever one had a task to do as business planning and delivery  were seen as war! So you planned accordingly.

My planning for my talk/tour of the V&A Hidden in the Collections Tour - Africans in Medieval & Renaissance Art 1pm October 24th 2013 was to be meticulous and detailed.

I was invited to introduce a group of upto 24 people to the hidden black presence in seven personally selected works from the V&A’s collection, in the course of a 75 minute walk and talk, the pieces were spread over six floors of the V&A.

I created a summary sheet of my chosen pieces to be used as a handout on the day.

I had worked and walked the route a number of times so I had a good idea of the walk time – the time to walk from piece to piece - between each black presence.

Total talk time (T) plus total walk time (W) had to be 75mins. From experience W was found to be 20 minutes, leaving 55 minutes for talking. Further all the presences – heathen, king saint and so on -  were to be allocated the same time with the exception of the moor heads for which I wanted to discuss three related moor’s head presences. So, t was the time I would talk on 5 presences plus t/3 on each of two of the moor’s heads plus t/2 for the talk’s intro. So we have

I structured each eight minute talk based on asking and answering a series of questions:

Where is the black?
A game for the audience to find and physically examine the black presence (briefly) on their own, before I presented it.

Why is the piece where it is in V&A?
The things which made the curator at one of the world’s leading art and design museum decide to display this piece here.

What was the purpose of the work?
Continuation of the previous question looking into exactly how the piece worked in its day.

So, I had a plan with a structure written up on cards and with timings, I was ready to engage ‘the enemy’!

Introduction
The group assembled in the v&A's Grand Entrance on time – 1pm -  about 20 with some faces I recognized to ease the pressure or as well as some members of the V&A staff – to add to it!  Rather than give my introduction in the reception I preferred to give it in the V&A s Medieval and Renaissance (MedRen) wing itself so we moved over .

Using the MedRen’s exhibits I was keen to emphasize that the V&A was a museum of practical art: art with a purpose. And that we were we going to look at pieces whose purpose was a combination of the heavenly, in glorifying God and the earthly, in acknowledging aka bigging up the patron.

The V&A s MedRen wing is such an open, light and airy space full of the most wonderful objects, brilliantly presented and curated which when coupled to a willing attentive audience made it real easy to present. I finished my introduction by giving them the talk’s structure and the black presences I ‘d be discussing with them.  I was carried away and ranted on beyond the allocated time by a some minutes. Sadly, my poor time keeping was to get worse.

Also forgot to appoint an ‘official photographer’ so regreatblly I have no scene setting shots or visual record of my tour.

The Heathen – The Marnhull Orphery

I spent some time – too much - discussing the scene with the character flagellating Christ as he carries the cross.

The V&A catalogue entry  for the orphery describes this scene as “Christ carrying the Cross (aided by Simon of Cyrene)”. I question the use of the word ‘aided’ here as you can see ‘Simon of Cyrene’ is clearly whipping rather aiding.

The Bible does not support this whipping, rather it speaks of  Simon of Cyrene ‘bearing’ the cross.

Examples of [Simon of Cyrene] 'bearing' Christ's cross are to found in a number of works in the V&A for example in this carved mother of pearl piece from theV&A collection, which shows a diminutive Simon bearing the rear of the cross.

However Simon of Cyrene  might indeed have been dark skinned as depicted, as  his home town Cyrene was at the time in Libya. So, Simon may well have had a dark skin of a Moor or sub Saharan African, but certainly not a whip according to the Gospels . So I believe the V&A text for the Mornhull Orphrey is in error, I plan to draw this to the attention of the V&A.

We discussed the Orphrey  far too long ,almost 20 minutes I’m told, and that’s when it started to go wrong but I didn’t fully realize it as I was enjoying it so much!

The Servant or Attendant – The della Robbia Altarpiece

I tried to speed things up by speaking faster and not pressing for questions. And I asked one of the V&A staff to give me a sign after 7 minutes. But once in my flow I forgot time and ignored the signs that I was running over !

So by the end of the Altarpiece it had all gone pear shaped. Time as my good Czech friend Pavel would say was not my friend!

Over thirty minutes and only 2 presences done  so in keeping with Sun Tzu I reviewed my plan. I decided to drop or at least condense some questions and focus on the last question: What did the black presence mean?

I was looking forward to this piece as I knew it well having already written in this blog and spoken on the piece.

The revised plan seemed to be going well until one of the audience asked why there wasn’t a picture of the quintessential black St Maurice at Magdeburg Cathedral next to the work. That question was countered by someone pointing out that the plaque supporting the work did indeed refer to the black St Maurice. However several members of the audience agreed that a picture might be better, especially for the young people to make the  connection as they are not keen on reading plaques, preferring  pictures.
Having slept on it I think a picture would be brilliant idea as that would make the point clearly that St Maurice’s black colouring was only one of his several attributes which included his Roman soldier’s armour and lance or just like St Paul’s attribute is his sword identifying him as defender of the Faith.

I plan to write to the V&A to suggest they include the picture from the Image of the Black in Western Art Vol II which I used for my piece on St Maurice in blackpast.org.

The St Maurice picture debate took some time, which put me even further behind.

I now decided  to further reduce the background detail and go straight to the black presence in the next pieces.

The King – The Adoration

This - the black presence in the adoration scene -  was my specialist topic. I’d even done some additional research work on this particular piece. I wanted to know more about that flag with its gold crescent - what did it mean or refer to ?

I managed to find which king the flag, in the work’s background, might have represented. From the picture taken from The Image of the Black In Western Art of the flags of the three kings you can see one of them did have a crescent with a star. Space does not permit a full analysis so this will be the subject of another post. Equally there was no time to talk about the flag or discuss the works patron both subjects. But no time, other than a quick introduction to the black presence at the Adoration and then onwards; running out of time. 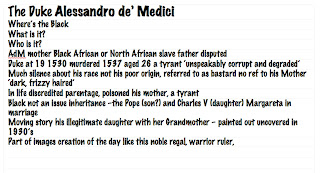 One of my favorite presences,  I’ve been meaning to write about Alessandro d'Medici - the illegitimate son of a slave woman and a d'Medici aire , either  Lorenzo II de' Medici or Giulio de' Medici (later Pope Clement VII) . With little build up, I went straight into the black presence.
I brought in his illegitimate daughter Gulia being painted out of  1537 Pontormno’s picture of her with Maria Salviati a relative (as shown above) , sometime in the 19th  century or 17th century depending whether or not you believe the Walter's Museum site or Joaneath Spicer's article [1], only to be revealed in the 1930s during cleaning, but with no time to fully discuss the consequences and meanings. Onwards and upwards to the 6th floor and final floor for the ceramics and the Moor’s head

The Moor’s Head – One Jug and  Durato and Urbino  Plates

Had three pieces to do in under than 12 minute, did it, even had a round of applause at the end of my talk.

The plan didn’t survive the first two presences, I took on too much in the time available. To do justice to seven pieces over six floors in 75 minutes was far too much. I would have been better to take one maybe two black presences in the museum's collection and present in depth.

On the plus side  I very much enjoyed the planning and execution especially the execution as I had the chance to present in the MedRen wing. Also the response from the audience was great, if the clapping and number of thank yous at the end are any measure. Then there was some feedback by email ‘I thoroughly enjoyed your tour’  from one visitor, while on Twitter it was ‘really enjoyed’ by another. Additionally activity on the BlackMagusBlog (this  blog’s new name)  increased almost three times  through  the increase in GB visitors, while Acedmedia.edu searches for me are up to 3 this week from zero last week!

My key learnings for next time (if I'm invited back to do another tour ) are to do less, so present more and take my iPad to show complementary images and don't forget to appoint a photographer and nevertheless be ready to adapt  the plan!