Review: A Book of Secrets by Kate Morrison 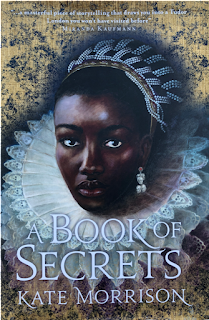 My introduction to Kate Morrison was her paper 'Go back & fetch what you forgot': building a fictional character from the archives presented at What’s Happening in Black British History V Workshop in October 2016 which included her announcing she had a book deal that was A Book of Secrets, all while cradling her sleeping baby!

The approach she discussed at that workshop produced this work of fiction based on the lives of black Africans who lived in Tudor England working in domestic services and as craftsmen and women. Morrison’s fiction contrasts with the facts in Miranda Kaufmann’s Black Tudors: The Untold Story and Onykea Nubia's Blackamoores: Africans in Tudor England, Their Presence, Status and Origins who both describe the African presence from their researches in the archives. Morrison, with equal academic rigour to researching the archives takes the facts from her diligent scholarship and through her masterful storytelling skills brings the black African Tudor presence to life making it real, making it human, giving it flesh and blood with emotions and desires.

Her book is not just the story of the life and times of Suky/Susan Charlewood/Nsowah a black woman and her struggle for survival in Elizabethan England, it is much richer, deeper and wider telling stories of class, religion, death, love and sex set against the spiritual and secular suspicions and fears of the day, telling the story of a black woman making her way seeking to understand her heritage and find her true identity in a world of national and international, brutal religious strife and military intrigue. Morrisons skilfully examines and reveals the political and religious climate of the time, as England wanted its own sovereignty not that of the Pope, not unlike the demands of the Leavers in Britain’s BREXIT debate.

Morrison’s work demonstrates the importance of researching black British history not just as an academic exercise but to bring that research to light, making it accessible to a wider, non- academic audience and despite the duties of motherhood she brought her story to life for the WHBBH audience and now to a much wider one. Here we have her critical interrogation of the archives coupled with her innovative imagination creating a wholly plausible, readable work of fiction based on fact - a page turner - I loved it - look forward to the film.  #FullyRecommended
Posted by Michael at 22:21