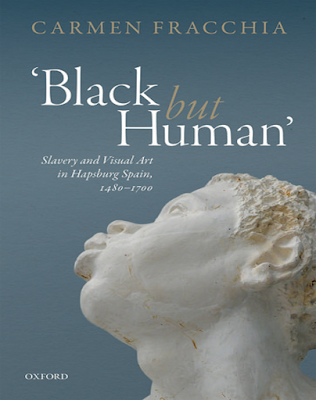 There is so much in Dr Carmen Fracchia ‘Black but Human’: Slavery and Visual Art in Hapsburg Spain 1480-1700 . I have struggled to write this review. Where do I begin? How can I end ? Almost every page has some new, revealing insights into what for me has been a paradox in my studies of the black presence in Renaissance art.

Most, if not all, the black figures in Renaissance art are the enslaved or the children of the enslaved purchased at Spanish markets. Fracchia tells us that the Iberian Peninsula had a black enslaved population of around 2 million over the period covered by the book, they were 10 to 15 percent of the population of Seville, Valencia, Lisbon and  other cities, yet there are so few to be found in art from the region during this time. Why?

The paradox becomes even more intriguing when considering the literary black presence as oppose to the visual, when comparing Spanish texts from the period to those found in the rest of Western Europe. There is the very limited visual presence in Spanish art which is in a puzziling contrast to the many written expressions of that presence in its literature. Making me double down on the question: why so few black images in Spanish art?

Fracchia builds on the scholarship found in the multi volume seminal work edited by Bindman and Gates Image of the Black in Western Art , which I have discussed elsewhere in this Blog when the 2nd edition was launched at the British Museum and when a further four volumes were added, today there are ten volumes. Fracchia explains in religious and social terms what the black image meant to Spanish culture at the time. Unlike, on the whole, the analysis found in Image of the Black in Western Art,  Fracchia takes not just the view of the Spanish elites found in the Church or in the Court but also the voices and the views of the black enslaved Afro-Hispanics in their desire to be considered human.

Fracchia develops the ideas hinted at in the works title Black but Human giving the enslaved a humanity, a dignity which she discusses throughout her book, demonstrating how many works are ‘[important] relays of power and resistance’. She opens with an analysis of literature which goes further than Victor Stoicha’s chapter in Image of the Black in Western Art - Image of the Black in Spanish Art: Sixteenth and Seventennth Century, Fracchia talks about the process of ‘appropriation and adaptation’ of black carols – poems of ‘devotion and entertainment’ sung in hablar negresco – by white imitators who intentions were to mock the blacks, in contrast to the ‘real’ Afro Hispanic writers whose central theme was we are Black but Human, despite being enslaved they wanted their common humanity acknowledged.

Fracchia describes how the Church considered the main function of images was to instruct the believer, in doing so they must support religious teaching. Thus ‘Catholic visual form was to be intensely scrutinized and monitored from conception to consumption’ however such actions by the Church do not fully explain the absence of black figures as the Church. As perhaps a counter Reformation measure the Church actually created black saints to attract black people to Christianity. She argues that there are perhaps two cases in which this absence is understood.

Firstly, the Black Magus in the Adoration scene a common image in the rest Europe, discussed elsewhere on this blog, took a long time to be accepted into Hispanic Adoration iconography due to almost eight centuries of domination by the ‘Moors’, there was a resistance to the apparent Muslim presence and when they did accept the Black Magus presence it was the most exotic version to underline his otherness ‘ a visual distance from the daily reality of [Afro-Hispanics]’. Secondly, in the case of royal portraiture the absence of black people was the very nature of the Hapsburg Court which excluded people considered not worthy from portraiture, there were ‘no depictions of slaves as elegant servants unlike regal images throughout Western Europe between the sixteenth and eighteenth century’, additionally there was the fear of Muslim contamination.

Having explained the paradox of the numbers of Afro-Hispanics and their literary legacy compared with their essential absence from visual representation from the period. She goes further to discuss the visual manifestations of the physical violence of Hispanic slavery showing how the Black but Human topos encodes the painful ambivalent and ultimately inhuman experience suffered by the enslaved and the ex-enslaved in Imperial Spain.
To make manifest the physical violence of Spanish slavery from the period Fracchia skilfully deconstructs depictions of The Miracle of the Black Leg by Spanish and Italian artists. She shows the brutality, the ‘gratuitous cruelty’ of the former interpretations, as the image is used ‘to signify the exploitation and violent appropriation of the African body by the mighty imperial power of Spain’. On a personal note this was a revelation to me as I was more familiar with the comparatively benign Italian version of The Miracle, where the leg is taken from a recently deceased black body and remains black, unlike in Spain where the African is still very much alive as his leg is cut off and the miracle is extended to not just replacing the diseased leg of the white clergy with a working , functional leg but also the leg – in the Spanish- version becomes white!

For me the climax of Fracchia's scrupulously researched and argued work is her detailed analysis of two complementary paintings -  Velázquez's ‘exceptional’ c1650 portrait of his enslaved assistant Juan de Pareja and Juan de Pareja’s ‘extraordinary’ 1661 The Calling of St Matthew. Fracchia shows how Velázquez endows Pareja with his own ‘humanity’ making him the equal of any viewer - white or black. While in The Calling of St Matthew Pareja builds on his own humanity, borrowing ideas from his master’s Las Meninas to show his ‘worth and nobility’, representing ‘the process of liberation from slavery (Velázquez manumitted him the same year he painted Pareja's portrait) by choosing to Europeanize his features as a visible sign of religious, cultural and social assimilation.’  Both artists – master and servant – make the same point in their own way, Pareja is black but he is human.

My only gripe – which I consider quite minor - is that I wanted to read more about Sebastián Gómez  the black enslaved assistant to Bartolomé Estaban Murillio, who was, some 30 years younger than Pareja. Murillo manumitted him, and he went on to be an artist in his own right. I was left wanting to know more about Gómez and make the inevitable comparisons with Velázquez’s Pareja. However, all is not lost! This book demands an exhibition to bring together all the works discussed, and ‘Black but Human’: Slavery and Visual Art in Hapsburg Spain 1480-1700 is the exhibition’s title and catalogue. It would be the  chance to celebrate the works of Juan de Pareja  and Sebastián Gómez – I believe to be the first known European black artists - along with the many other works discussed in the book. I look forward to attending and writing my review!

I'll conclude by making two points. First, Fracchia resolves my paradox by describing how and why the black image was excluded from the Adoration and royal portraiture, as slaves black people  were not considered worthy of representation and there was association with the ‘Moors’ and Islam so no blacks appeared in paintings from the period. Secondly. Fracchia gives the voice and the views of the enslaved unlike any book on art from the period I have read, specifically she builds on the conventional academic scholarship of Victor Stoicha’s chapter in Image of the Black in Western Art, she gives expression and humanity to the black enslaved, as well as consistently recognising slavery as a crime against humanity – sympathetically considering the enslaved and ex-enslaved Afro-Hispanics Black but Human. I whole heartedly recommended this book, unreservedly.
Posted by Michael at 08:49