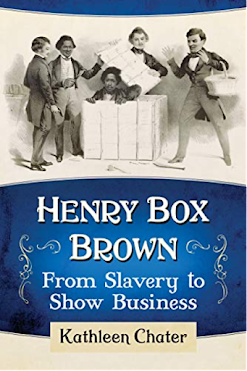 Kathy’s highly readable latest book is the biography of the African American, fugitive slave, abolitionist and entertainer – Henry ‘Box’ Brown - born around 1815 into slavery on a planation in Richmond Virginia from where he conceived an ingenious  plan to escape enslavement – he would be mailed to freedom in a box to the free North. His plan worked, hence that middle name. Kathy describes how he wrote his autobiography, Narrative of the Life of Henry Box Brown, and commissioned a panorama, a series of anti-slavery images along with a depiction of his escape.

He toured with his box, the Narrative and panorama in the Northern free states before fleeing to Britain in 1850 following passing of the Fugitive Slave Act. Britain became his home for 25 years, where he married again and had a second family. Before the Civil War he toured Britain becoming a celebrated abolitionist, speaking out against slavery and its horrors. After the American Civil War, when his abolitionist anti-slavery message was no longer needed, he reinvented himself in order to earn a living, using the acting and enteraining skills he had developed touring to create Prof. H. Box Brown, King of the Mesmerists and The African Prince mesmerist and conjuror acts. He returned to America in 1875 and continued touring. He died in 1897 in Canada.

The book’s contents page reads like a play, making the book easy to follow and read, as well as to dip into. Kathy divides his life into three acts which each act having a number of scenes. Act 1 Liberty describes his early years, his escape to freedom and the start of anti-slavery touring, escaping the Fugitive Slave Act to Britain, ending with how he has to reinvent himself in the face of difficulties; Act 2 Partnership tells of his marriage, more touring and more changes as he develops other lecture subjects, including the Indian Mutiny, and finally Act 3 Magic tells of his life after slavery ended in America and his abolitionist story no longer needed to be told.

There are some nice personal touches such as when discussing why there are so few ‘women of colour’ to be found in the crime records. Kathy tells us this is ‘partly because women were (and are) more law abiding’ (my emphasis). As well as giving her opinion ‘The Welsh…tend to regard everything that comes from England as culturally inferior.’

Henry Box Brown is a very enjoyable book to read, diligently researched with an authoritative scholastic air yet still very accessible. Her many quotes and references are backed by detailed endnotes and a comprehensive bibliography. I particularly like the way Kathy uses sub headings to break the story up including  a Betteridge headline showing her journalist roots – ‘[Henry Box Brown] the First Magician of Colour?’  - I leave you to guess the answer.

If you are looking for an accessible introduction to understanding Henry Box Brown’s life and how a fugitive slave survived, even thrived on the anti-slavery lecture and presentation circuit in Victorian England alongside others such as Ellen and William Craft, William Wells Brown and Frederick Douglass, then this is the book for you. #Recommended.