The Black King a slave ? No!

Twice I re ent times I have read that image of the Black King has its origins in slavery both times from leading white Western institutions who appear to have only one lens for the observation of  Black history - slavery. All Black history leads back to slavery in their eyes. This is wrong. The Black King in Adoration images does not have its roots in slavery, The image has a rich and complex history which rooted in bible study, courtly practice and artistic tradition.

FIRST TIME...
The first time was a piece in the Guardian which included the statement:

The emergence of a realistically portrayed black character in Renaissance art reflected ….. a seismic shift in global events as European ships, led by Portugal and Spain, explored the Atlantic and established trading – and slaving – outposts on the African coast.

I was so incensed by this poorly researched and ill-informed piece I wrote a lengthy tweet which sought  to correct the piece's error.

Myrrh mystery: how did Balthasar, one of the three kings, become black? https://t.co/Uar9QsuYVu #JonathanJones @guardianartbot @guardian
A miss-informed article - Portugal, Spain & slavery had no part in the origins of image of the Black Magus - follow thread for actual story

[I]t would take nearly 1,000 years for European artists to begin representing Balthazar, the youngest of the three kings, as a black man. Why? The explanation can be found through a closer look at the history of this period—specifically, in the rise of the African slave trade in mid-1400s.

No tweet this time I will respond to the closing sentence of their blog post  (sic) We invite your input on this work, our approach, and what we have shared here.
The idea that one of the three Magi could be Black, predates White Western European chattel slavery - the Atlantic trade in enslaved African people dates from the 15th century. Equally the Black magus image predates that trade as it first recorded in the mid 14th century Holy Roman Empire Bohemia. 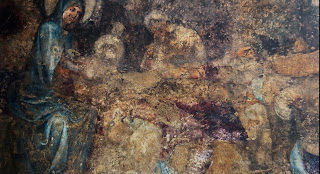 The image was not a response to what the Guardian calls a "seismic shift in events led by slavery"'  nor was it as the Getty museum says due "specifically, [to] the rise of the African slave trade in mid-1400s." Its origin is complex, on the one hand  rooted in the age old conflict between church and state - Pope and Emperor - on the other what can only be called  Renaissance cognitive dissonance as ideas and images became conflated.
The Roman theologian Tertullian was the first  to suggest that the Magi were kings basing his idea on an interpretation of Psalms 72:10-11 ‘The kings of Tarshish....the kings of Sheba and Seba will present him gifts. All kings will bow down to him and all nations will serve him’.  There were other Adoration prophesies to be found in the Old Testament though more obscure -  Queen of Sheba visiting Solomon and ‘three mighty men’ visiting David. Solomon and David were both kings of the Jews. 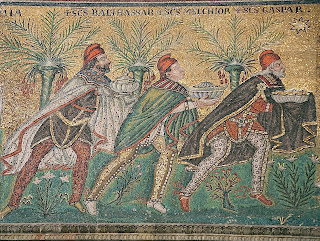 The emergence and development of the black Magus was complicated by myths and themes around two other blacks - Prester John, the mythical Ethiopian King and the Queen of Sheba – their iconography complicated and contaminated that of the black Magus.  It is safe to say is that Cologne played an important role in the mid fourteenth century and perhaps earlier in portraying one of the Magi as black : the patron saint of the city was the black Saint Maurice whose representation perhaps, has its origins in the Ethiopians Frederick II (1194-1250) met on his Crusades; the city also also had the three Magi represented on its coat of arms and its Cathedral contains the shrine of the three kings. 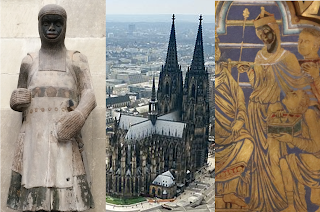 So to say that the image was a response to slavery or was specifically related slavery is incorrect and ill-informed,  its origin predates the transatlantic slave in enslaved Africans. Essentially the Adoration composition celebrates all earthly Kings coming together to pay homage  to the heavenly King - Jesus God made man, King of Heaven and Earth.
To conclude the images of the Black Magus  has a history which began before the trade in enslaved people,  part of a very different story - slavery is NOT the only lens to consider the Black image and its  history.
Posted by Michael at 02:07