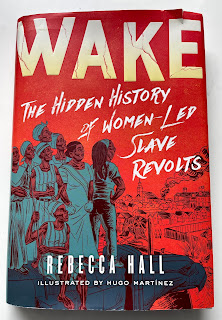 It was not until I was reading the acknowledgements that I was reminded that I’d helped in a very small way to make this important and wonderful book happen - Rebecca Hall’s WAKE:THE HIDDEN HISTORY OF WOMEN LED-SLAVE REVOLTS  with illustrations by Hugo Martînez published June 2021.  Rebecca writes ‘I also joyfully thank all of Wake’s supporters on Kickstarter’ I was one of those supporters in 2018.

The book’s subtitle, for me, uses the descriptor hidden for Black history correctly. All too often Black history is described as hidden, forgotten, untold and so on , implying some agency denying the history being  brought to light when all that’s required is an enquiring mind and a few moments with Google. However in this case Rebecca’s history is really hidden – the history of Black woman. I know this from the work on my presentation on the Queen of Sheba from the Bible and Andromeda from the Classics both women were Black but were actively denied their Black identity - Misogynoir and the History of The Image of the African Woman in Western European Art

Rebecca tells a real hidden history one in which the deeds of men - Black and white – are noted while the acts of Black women most times go unrecorded. It’s in that unreceording, traces, clues are left of Black women’s presence and agency. Rebecca looks at eighteenth records of enslavement in institutions -  academic and commercial - on both sides of the Atlantic in an attempt to bring that Black women’s presence  to life, from delving into the uncatalogued records of the New York library to be being thrown out of the Lloyds of London archives being told ‘we decide who can see our records and for what purpose.’

It was the response of Lloyds that intrigued me, I was minded of the NY Times 1619 Project discussing the links between capitalism and enslavement  where it says: A majority of credit powering the American slave economy came from the London money market. Years after abolishing the African slave trade in 1807. I’ve written to Lloyds to find out more about that statement, more of that if and when Lloyds get back to me.

She tells her journey to find the truth of the Black women’s presence, with as she says ‘with a measured use of historical imagination’ to tell the story behind the statistic that at least one in ten of the slave ships had a revolt on board and ‘the more women onboard a slave ship, the more likely the revolt.

The book talks of the barbarity of the trade to women and their bodies. Rebecca writes of pregnant enslaved Black woman sentenced to death by hanging having her execution ‘delayed until after she gave birth because that baby was someone’s property.’ Of the heroism of the on-board revolts and of the ultimate self-sacrifices – the suicides of the Middle Passage. Stories, brilliantly and emotionally brought to life, then and now as we move in our mind’s eye from the eighteenth to the twenty-first century thro Hugo’s innovation in telling the story in graphic form. 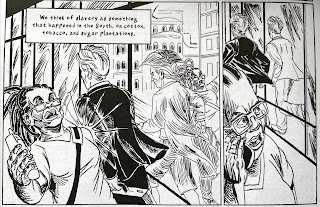 Hugo’s illustrations artfully tells Rebecca's story innovatively, often with much emotion and realism. For example, relating her lived experience as Black woman on the streets of New York, being forcibly brushed aside by an anonymous twentieth first century suited White business man, hurrying by, brief case in hand, who doesn’t break his stride, rushing on, ignoring the incident; contrasting that with an eighteenth century White man doing exactly the same thing but with a whip in hand,  eerily reflected in a window.

Rebecca in deed tells a hidden history and thru Hugo’s innovation in illustration the story is brought to life. Wake’s an emotional, challenging, thought provoking book. I was profoundly caught in its wake, the wake Rebecca describes of the victors’ version of history which erases resistance. Hugo on every page of Wake makes that resistance visually real as Rebecca brings it back to life through her measured historical imagination. To conclude, I’m feeling quite pleased with myself, that in a small way I have helped make this very important and highly readable book happen – a must read.